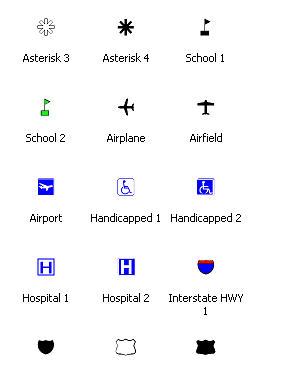 Symbology, in the context of Cartographic design, is the use of graphical techniques to represent geographic information on a map. Map symbols for geographic features include Visual variables such as color, size, and shape.[1]

Generically, a symbol is an object, picture, written word, sound, or particular mark that represents something else by association, resemblance, or convention. For example, Roman numerals are symbols for quantitative values and personal names are symbols representing individual people. On a map, a red cross is a commonly understood symbol to indicate the location of a hospital, crossed sabres may indicate the site of a battlefield, and a blue region would commonly be interpreted as a water body. [2] Semiotics is the scientific and philosophical study of how symbols work by establishing these connections between the representation and the represented concepts and real-world features. 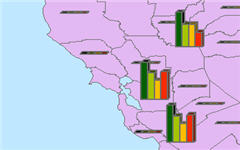 A chart used as a point symbol to portray quantitative data 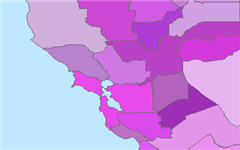 Color used a region symbol to portray a quantitative attribute 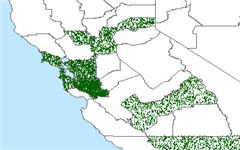 Maps communicate their messages through symbols--drawn graphics that represent spatial phenomena such as objects, places, or attributes.[3][4] At their most basic, map graphics can be categorized by Dimension: points, lines, and regions; each can be portrayed using symbology.[5] These symbols are commonly used to describe different features mapped. For example, cities or airports are commonly represented as point symbols (depending on scale), roads or railroads are usually represented by line symbols and the cities, lakes, or forests are common examples of region symbols.[6] 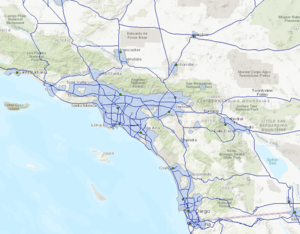 Examples of point, line and area features on a map. In this map the point represents populated places, the line represents roads, and the area represents urban areas

Map symbols are created by controlling Visual variables such as color, shape, and size; the range of such variables was set forth by Jaques Bertin and subsequent cartographers. When designing a map, the cartographer determines that a certain combination of these variables--a symbol (e.g., a dashed 0.5pt blue line)--represents a certain class of geographic feature (e.g., an intermittent stream). Although there is no set standard on symbology for all maps, especially among thematic maps, various conventions (such as using contour lines for elevation or blue for water) are commonly followed for some classes of maps.[7]

The choice of symbology is a crucial part of cartographic design; the goal is for the map reader to spend less time figuring out what the symbols mean, and thus more time using the symbols to understand the World.[8] A good symbol is easily recognizable (i.e., connected to the geographic features and concepts it represents), is aesthetically pleasing, and works in harmony with other symbols (for example, as part of a clear visual hierarchy). A legend is needed to explain the meaning of the symbols that cannot safely be assumed to be intuitive.

According to semiotics, map symbols are "read" by map users when they make a connection between the graphic mark on the map (the sign), a general concept (the interpretant), and a particular feature of the real world (the referent). For example, thick blue line (sign) = major river (interpretant), and this thick blue line = The Colorado River (referent). Map symbols can thus be categorized by how they suggest this connection:[9]

Cartographers typically have a great degree of freedom to design and implement map symbology according to their personal tastes, creativity, and innovation. However, in some applications, the need for consistency and immediate usability has driven the development of standard sets of symbols.

Military symbology has a very large and detailed library of symbols for use in military cartography, Intelligence, and Engineering. Each branch of America's armed forces use the same symbols making it easy to identify units that are friendly, neutral, or enemy. Also, military symbols are used to show equipment, installations, military or civilian, and military operations on and around the battle space. All these are a large part of military symbology. The army gets its symbology from NATO. NATO develops and approves the symbols that the armed services use. The Allied Procedural Publication (APP) are NATO's standards for military map-making symbology. An example of military symbols are APP-6A.

Emergency Mapping Symbology are specialized sets of symbols used by various organizations when planning for or responding to emergencies. These emergencies can be naturally caused (tsunami, earthquake, tornado, etc.) or human caused (rioting, terrorism, hijacking, etc.). Currently there is no international standard for emergency mapping symbology which has meant that various nations have created their own national symbology set. Recognized and standardized symbol sets help create a Common Operating Picture (COP) for varied organizations that have been brought together during a crisis or emergency. Symbols that are easy to identify with and easy to distribute are seen as key elements in creating maps that can be used to reduce fatalities, injuries or loss of property.

In September of 2005, the Department of Homeland Security released version 2.20 symbol set which was later incorporated into an ANSI Standard (ANSI INCITS 415-2006). This Symbology Standard was developed by the Federal Geographic Data Committee's Homeland Security Working Group (FGDC HSWG). From this group, a Symbology Subgroup with representatives from Federal, State, and local government worked to develop this Symbology standard and its usage. More information can be found at http://www.fgdc.gov/HSWG/. The standard is currently working its way through standards processes of ANSI and the Department of Homeland Security. [10]

The Emergency Mapping Symbology[11] was funded by GeoConnections, a Canadian government program that is national in scope. EMS is designed to support emergency management applications across Canada, including the national Multi-Agency Situation Awareness Systems (MASAS). EMS is part of efforts to create a Common Operational Picture both with emergency management agencies and with the public at large. It targets Web applications, but can also be used with traditional desktop applications.

The symbols are tailored to Canadian requirements for situational awareness reporting, first response, natural hazards assessment, public alerting, and critical infrastructure protection. The symbols are already being used by federal and provincial agencies, and are a valuable resource for Canada's Multi-Agency Situational Awareness System initiative, enabling emergency management organizations to share a geospatial incident, event and alert information within the context of a national common operational picture. Although the dataset is designed to meet needs in Canada, very few of the symbols are specific to Canada. Most symbols are applicable globally. As discussed elsewhere, the work has been heavily influenced by similar efforts carried out in other countries. What distinguishes the EMS symbol set is its design, which follows a set of design principles that make it particularly suitable for Web applications by both trained and untrained personnel alike.

The development of EMS was strongly influenced by three primary sources: