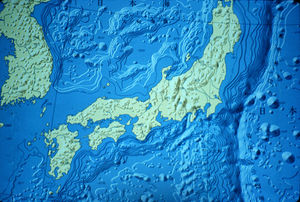 The use a darker shade or black is meant to indicate a depression in the ocean floor while the lighter shaded portions represent elevation increases. 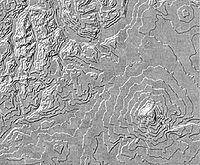 This is a good example of how light is used in showing the terrain features. Source: http://indiemaps.com/blog/2008/06/isolining-package-for-actionscript-3/

Tanaka (relief) contours are a method of displaying terrain developed by Professor Tanaka Kitiro in 1950[1] Tanaka called his technique the "Relief Contour Method;" However, it is usually called the "Illuminated Contour Method" or the "Tanaka Method".

Standard contours or hillshading techniques may not always be sufficient in representing terrain especially when a more artistic and pleasing map is needed[2]. Tanaka Kitiro's method applies light source to a contour map, typically at 300 degrees or another northwestern direction. The result is a 3D-like representation that helps the user visualize terrain and be able to effectively distinguish concave from convex land forms[3]. The method involves changing the width and color of the contour lines based on their relationships to the light source. This technique is designed to highlight or illuminate contour lines: contour lines facing the light source are drawn in white, while those in the shadow are drawn in black. The contour lines perpendicular to the light source are drawn thinner and change from white in the northwest to black in the southeast. In summary, it gives a realistic shadow-effect on terrain maps that allow the viewer to understand the features of the landscape as they would in person[4].

Although this technique was first tried in 1870, it was not effective because printing methods could not properly print the gray backgrounds required to show white lines. It was not until the 1950's that Kitiro Tanaka proposed two different types of relief representation: The orthographical relief method, and the relief contour method[5]. Thus Tanaka pioneered the production of these contours through some exquisite examples. Though exquisite, his method was time-consuming and was later automated using computer software. One of the first cartographers to create maps using Tanaka's method was Berthold Horn in 1982. In 2001, Patrick Kennelly further improved Tanaka's method by adding color. Doing this added a more realistic appearance to the maps [6].

Berthold Horn created one of the first computer-based methods of recreating Tanaka's method[4]. Many other methods of software are also available to create this illuminated hill-shading effect. To create this effect, many different websites will allow users to download specific software that allows them to alter contour lines and shading. An example of a website that allows this is GoldenSoftware.com. These websites will walk users through the production of Tanaka contours. The process is fairly similar throughout. Users simply download raster/grid data and edit the data based on the different nodes.

In the past, a disadvantage of using the Tanaka Method was that the map required a non-white background, but printers at the time were not equipped to handle printing gray backgrounds. However, this is no longer an issue due to better printer technology. The Tanaka Method is time-consuming and can visually exaggerate terracing. Despite these issues, this technique results in highly image-able maps that do not require much artistic ability to create. [7]