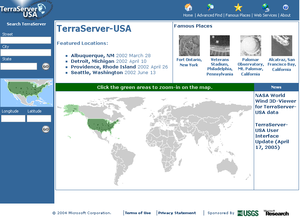 TerraServer-USA is a free online repository of public domain aerial imagery and satellite imagery, formerly known as Microsoft TerraServer. Though it was online as early as December 1997, the site was formally unveiled June 24, 1998 as part of an 18-month agreement between Microsoft, Compaq, and Aerial Images of Raleigh, North Carolina. It was created as a demonstration system to advertise the scalability of Microsoft's Windows NT Server and SQL Server, and used images from the United States Geological Survey (USGS) and Sovinformsputnik (the Russian Federal Space Agency).

Terraserver was the brainchild of the Turing Award winning researcher on database systems, Jim Gray. Before his death, Gray continued this work, developing Microsoft Virtual Earth and began a similar project that would become the Worldwide Telescope.

The TerraServer name is a play on words, with 'Terra' referring to the 'earth' or 'land' and also to the terabytes of images stored on the site.

One consistent joke about the service is its depiction of the Cupertino headquarters of Apple Inc. as barren land, using photographs taken in 1991.[1]