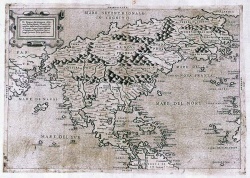 Map of North America from 1566 showing Italian inscriptions, both Terra In Cognita and Mare In Cognito.

Terra incognita (Latin "unknown land," with incognita stressed on its second syllable in Latin, but with variation in pronunciation in English) is a term used in cartography for regions that have not been mapped or documented. The expression is not found in ancient texts, and occurs first in the sixteenth century. The equivalent on French maps would be terres inconnues (plural form), and some English maps may show Parts Unknown.

An urban legend claims that cartographers labelled such regions with "Here be dragons". Although cartographers did claim that fantastic beasts (including large serpents) existed in remote corners of the world and depicted such as decoration on their maps, only one known surviving map, the Lenox Globe, in the collection of the New York Public Library [1], actually says "Here be dragons" (using the Latin form "HIC SVNT DRACONES"). [2] However, ancient Roman and Medieval cartographers did use the phrase HIC SVNT LEONES (literally, Here be lions) when denoting unknown territories on maps.

During the 19th century terra incognita disappeared from maps, since both the coastlines and the inner parts of the continents had been fully explored.

The phrase is now also used metaphorically by various researchers to describe any unexplored subject or field of research.