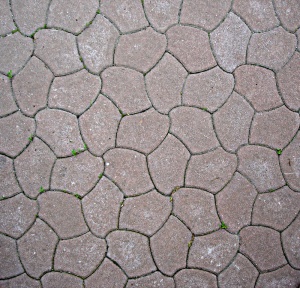 A tessellation or tiling of the plane is a collection of plane figures that fills the plane with no overlaps and no gaps. One may also speak of tessellations of the parts of the plane or of other surfaces. Generalizations to higher dimensions are also possible. Tessellations frequently appeared in the art of M. C. Escher. Tessellations are seen throughout art history, from ancient architecture to modern art.

In Latin, tessella is a small cubical piece of clay, stone or glass used to make mosaics.[1] The word "tessella" means "small square" (from "tessera", square, which in its turn is from the Greek word for "four"). It corresponds with the everyday term tiling which refers to applications of tessellations, often made of glazed clay.

Tilings with translational symmetry can be categorized by wallpaper group, of which 17 exist. All seventeen of these patterns are known to exist in the Alhambra palace in Granada, Spain. Of the three regular tilings two are in the category p6m and one is in p4m.

If this parallelogram pattern is colored before tiling it over a plane, seven colors are required to ensure each complete parallelogram has a consistent color that is distinct from that of adjacent areas. (This tiling can be compared to the surface of a torus.) Tiling before coloring, only four colors are needed.

When discussing a tiling that is displayed in colors, to avoid ambiguity one needs to specify whether the colors are part of the tiling or just part of its illustration. See also color in symmetry.

The four color theorem states that for every tessellation of a normal Euclidean plane, with a set of four available colors, each tile can be colored in one color such that no tiles of equal color meet at a curve of positive length. Note that the coloring guaranteed by the four-color theorem will not in general respect the symmetries of the tessellation. To produce a coloring which does, as many as seven colors may be needed, as in the picture at right.

Copies of an arbitrary quadrilateral can form a tessellation with 2-fold rotational centers at the midpoints of all sides, and translational symmetry with as minimal set of translation vectors a pair according to the diagonals of the quadrilateral, or equivalently, one of these and the sum or difference of the two. For an asymmetric quadrilateral this tiling belongs to wallpaper group p2. As fundamental domain we have the quadrilateral. Equivalently, we can construct a parallelogram subtended by a minimal set of translation vectors, starting from a rotational center. We can divide this by one diagonal, and take one half (a triangle) as fundamental domain. Such a triangle has the same area as the quadrilateral and can be constructed from it by cutting and pasting.

Hexagonal tessellation of a floor

Penrose tilings using two different polygons are the most famous example of tessellations that create aperiodic patterns. They belong to a general class of aperiodic tilings that can be constructed out of self-replicating sets of polygons by using recursion.

Tilings and honeycombs can also be self-dual. All n-dimensional hypercubic honeycombs with Schlafli symbols {4,3n−2,4}, are self-dual. 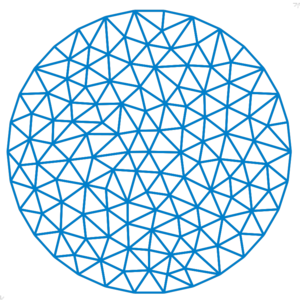 A tessellation of a disk used to solve a finite element problem. 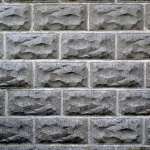 These rectangular bricks are connected in a tessellation, which if considered an edge-to-edge tiling, topologically identical to a hexagonal tiling, with each hexagon flattened into a rectangle with the long edges divided into two edges by the neighboring bricks. 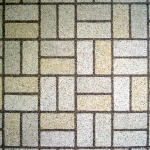 This basketweave tiling is topologically identical to the Cairo pentagonal tiling, with one side of each rectangle counted as two edges, divided by a vertex on the two neighboring rectangles.

In the subject of computer graphics, tessellation techniques are often used to manage datasets of polygons and divide them into suitable structures for rendering. Normally, at least for real-time rendering, the data is tessellated into triangles, which is sometimes referred to as triangulation. In computer-aided design, arbitrary 3D shapes are often too complicated to analyze directly. So they are divided (tessellated) into a mesh of small, easy-to-analyze pieces—usually either irregular tetrahedrons, or irregular hexahedrons. The mesh is used for finite element analysis. Some geodesic domes are designed by tessellating the sphere with triangles that are as close to equilateral triangles as possible.

Basaltic lava flows often display columnar jointing as a result of contraction forces causing cracks as the lava cools. The extensive crack networks that develop often produce hexagonal columns of lava. One example of such an array of columns is the Giant's Causeway in Northern Ireland.

The Tessellated pavement in Tasmania is a rare sedimentary rock formation where the rock has fractured into rectangular blocks.

For an infinite tiling, let

be the average number of sides of a polygon, and

the average number of sides meeting at a vertex. Then

. For example, we have the combinations

, for the tilings in the article Tilings of regular polygons.

A continuation of a side in a straight line beyond a vertex is counted as a separate side. For example, the bricks in the picture are considered hexagons, and we have combination (6, 3). Similarly, for the basketweave tiling often found on bathroom floors, we have

For a tiling which repeats itself, one can take the averages over the repeating part. In the general case the averages are taken as the limits for a region expanding to the whole plane. In cases like an infinite row of tiles, or tiles getting smaller and smaller outwardly, the outside is not negligible and should also be counted as a tile while taking the limit. In extreme cases the limits may not exist, or depend on how the region is expanded to infinity.

For finite tessellations and polyhedra we have

is the number of faces and

the number of vertices, and

is the Euler characteristic (for the plane and for a polyhedron without holes: 2), and, again, in the plane the outside counts as a face.

A tile with a hole, filled with one or more other tiles, is not permissible, because the network of all sides inside and outside is disconnected. However it is allowed with a cut so that the tile with the hole touches itself. For counting the number of sides of this tile, the cut should be counted twice.

For the Platonic solids we get round numbers, because we take the average over equal numbers: for

is larger than 4. For example, consider one layer of cubes, extending in two directions, with one of every 2 × 2 cubes removed. This has combination (4, 5), with

, corresponding to having 10 faces and 8 vertices per hole.

Note that the result does not depend on the edges being line segments and the faces being parts of planes: mathematical rigor to deal with pathological cases aside, they can also be curves and curved surfaces.

Tessellations of other spaces