The scientific method and GIS

The scientific method is a procedure through which scientific research takes place. It is used to gain insights into the observable universe through the analysis of empirical data, and to answer questions and create new ones.[1] Due to the broad nature of geography as a discipline, as well as the fact that it is impossible to perform many geographic analyses in a controlled environment, it is necessary to take certain considerations into account when applying the scientific method to geographic data. 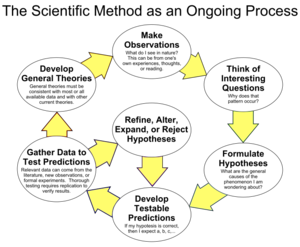 The scientific method is a process by which we can discover truth through experimentation and logic.

The scientific method follows these steps:

The hypothesis may be refined or rejected before all the steps are performed based on discoveries from pre-existing data and experimentation, the collection of data or materials needed to perform experiments, or as a result of the experiments.[2][3]

Every scientific experiment needs a scientific control in order to create a baseline of data that has not been affected by the variable being tested. It is an experiment or observation that is meant to show the phenomena in question without under "ordinary" circumstances. This control group makes it possible for scientists to compare their actual results to results unaffected by their methods.There are two different kinds of controls: positive and negative. Negative controls are control groups that weren't exposed to the treatment. Positive controls are groups that weren't exposed to the treatment, but were exposed to a different treatment that is supposed to produce similar results to the original study.[4]

Experiment Example: studying samples on soils that were affected by certain chemicals.

Field science could be defined as those avenues of research that must be studied in the world, as opposed to Laboratory science that can be studied in a laboratory environment. The former would include such disciplines as wildlife biology, political science, economics, and geography, while the latter would include disciplines such as particle physics, chemistry, and microbiology. While the scientific method, with its expectation of tightly controlled experiments, works well in the lab, field science presents a number of challenges:[5]

For example, if you were hoping to study the societal effects of hospital location, a fully controlled experiment would require that you find two towns that share the same characteristics, then build a hospital Town A and leave Town B without a hospital. Then you would spend the next several years measuring how many more people died in Town B than Town A, making sure every subsequent action in the towns was identical except for the experimental variable. This is impossible for several of the reasons above.

The most common solution to these issues in field science is to employing models and simulation, using tools such as Geographic information systems and Inferential Statistics. Because a model is a representation of the real world, it can be manipulated and experimented on quickly, cheaply, and with no real-world impacts. This approach is not perfect, primarily because the model is never a perfect representation of the real world situation, containing only the information the scientist chooses to represent. This can lead to a number of problems, and the results are rarely as reliable as a fully controlled laboratory experiment. However, the ability to derive theory from simulation-based science is better than most of the alternatives.[6]

The Role of GIS

Geographic information systems can be a valuable tool in several phases of a modeling approach to the scientific method: