From wiki.gis.com
Jump to: navigation, search
For the form of code consisting entirely of subroutine calls, see Threaded code. For the collection of posts, see Internet forum#Thread. 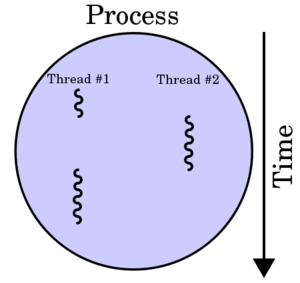 A process with two threads of execution.

In computer science, a thread of execution results from a fork of a computer program into two or more concurrently running tasks. The implementation of threads and processes differs from one operating system to another, but in most cases, a thread is contained inside a process. Multiple threads can exist within the same process and share resources such as memory, while different processes do not share these resources.

On a single processor, multithreading generally occurs by time-division multiplexing (as in multitasking): the processor switches between different threads. This context switching generally happens frequently enough that the user perceives the threads or tasks as running at the same time. On a multiprocessor or multi-core system, the threads or tasks will generally run at the same time, with each processor or core running a particular thread or task. Support for threads in programming languages varies. A number of languages support multiple threads but do not allow them to execute at the same time. Examples of such languages include Python, and OCaml, because the parallel support of their runtime environment is based on a central lock, called the "Global Interpreter Lock" in Python and the "master lock" in Ocaml. Other languages may be limited because they use threads that are user threads, which are not visible to the kernel, and thus cannot be scheduled to run concurrently. On the other hand, kernel threads, which are visible to the kernel, can run concurrently.

Many modern operating systems directly support both time-sliced and multiprocessor threading with a process scheduler. The kernel of an operating system allows programmers to manipulate threads via the system call interface. Some implementations are called a kernel thread, whereas a process (LWP) is a specific type of kernel thread that shares the same state and information.

Programs can have user-space threads when threading with timers, signals, or other methods to interrupt their own execution, performing a sort of ad-hoc time-slicing.

Threads differ from traditional multitasking operating system processes in that:

Systems like Windows NT and OS/2 are said to have "cheap" threads and "expensive" processes; in other operating systems there is not so great a difference except the cost of address space switch which implies a TLB flush.

Multithreading as a widespread programming and execution model allows multiple threads to exist within the context of a single process. These threads share the process' resources but are able to execute independently. The threaded programming model provides developers with a useful abstraction of concurrent execution. However, perhaps the most interesting application of the technology is when it is applied to a single process to enable parallel execution on a multiprocessor system.

This advantage of a multithreaded program allows it to operate faster on computer systems that have multiple CPUs, CPUs with multiple cores, or across a cluster of machines — because the threads of the program naturally lend themselves to truly concurrent execution. In such a case, the programmer needs to be careful to avoid race conditions, and other non-intuitive behaviors. In order for data to be correctly manipulated, threads will often need to rendezvous in time in order to process the data in the correct order. Threads may also require atomic operations (often implemented using semaphores) in order to prevent common data from being simultaneously modified, or read while in the process of being modified. Careless use of such primitives can lead to deadlocks.

Another advantage of multithreading, even for single-CPU systems, is the ability for an application to remain responsive to input. In a single threaded program, if the main execution thread blocks on a long running task, the entire application can appear to freeze. By moving such long running tasks to a worker thread that runs concurrently with the main execution thread, it is possible for the application to remain responsive to user input while executing tasks in the background.

Operating systems schedule threads in one of two ways:

Traditional mainstream computing hardware did not have much support for multithreading as switching between threads was generally already quicker than full process context switches.[clarification needed] Processors in embedded systems, which have higher requirements for real-time behaviors, might support multithreading by decreasing the thread-switch time, perhaps by allocating a dedicated register file for each thread instead of saving/restoring a common register file. In the late 1990s, the idea of executing instructions from multiple threads simultaneously has become known as simultaneous multithreading. This feature was introduced in Intel's Pentium 4 processor, with the name hyper threading

A process is the "heaviest" unit of kernel scheduling. Processes own resources allocated by the operating system. Resources include memory, file handles, sockets, device handles, and windows. Processes do not share address spaces or file resources except through explicit methods such as inheriting file handles or shared memory segments, or mapping the same file in a shared way. Processes are typically preemptively multitasked.

A kernel thread is the "lightest" unit of kernel scheduling. At least one kernel thread exists within each process. If multiple kernel threads can exist within a process, then they share the same memory and file resources. Kernel threads are preemptively multitasked if the operating system's process scheduler is preemptive. Kernel threads do not own resources except for a stack, a copy of the registers including the program counter, and thread-local storage (if any).

Threads are sometimes implemented in userspace libraries, thus called user threads. The kernel is not aware of them, they are managed and scheduled in userspace. Some implementations base their user threads on top of several kernel threads to benefit from multi-processor machines (N:M model). In this article the term "thread" (without kernel or user qualifier) defaults to referring to kernel threads. User threads as implemented by virtual machines are also called green threads. User threads are generally fast to create and manage.

Fibers are an even lighter unit of scheduling which are cooperatively scheduled: a running fiber must explicitly "yield" to allow another fiber to run, which makes their implementation much easier than kernel or user threads. A fiber can be scheduled to run in any thread in the same process. This permits applications to gain performance improvements by managing scheduling themselves, instead of relying on the kernel scheduler (which may not be tuned for the application). Parallel programming environments such as OpenMP typically implement their tasks through fibers.

Threads in the same process share the same address space. This allows concurrently-running code to couple tightly and conveniently exchange data without the overhead or complexity of an IPC. When shared between threads, however, even simple data structures become prone to race hazards if they require more than one CPU instruction to update: two threads may end up attempting to update the data structure at the same time and find it unexpectedly changing underfoot. Bugs caused by race hazards can be very difficult to reproduce and isolate.

To prevent this, threading APIs offer synchronization primitives such as mutexes to lock data structures against concurrent access. On uniprocessor systems, a thread running into a locked mutex must sleep and hence trigger a context switch. On multi-processor systems, the thread may instead poll the mutex in a spinlock. Both of these may sap performance and force processors in SMP systems to contend for the memory bus, especially if the granularity of the locking is fine.

However, the use of blocking system calls in user threads or fibers can be problematic. If a user thread or a fiber performs a system call that blocks, the other user threads and fibers in the process are unable to run until the system call returns. A typical example of this problem is when performing I/O: most programs are written to perform I/O synchronously. When an I/O operation is initiated, a system call is made, and does not return until the I/O operation has been completed. In the intervening period, the entire process is "blocked" by the kernel and cannot run, which starves other user threads and fibers in the same process from executing.

A common solution to this problem is providing an I/O API that implements a synchronous interface by using non-blocking I/O internally, and scheduling another user thread or fiber while the I/O operation is in progress. Similar solutions can be provided for other blocking system calls. Alternatively, the program can be written to avoid the use of synchronous I/O or other blocking system calls.

SunOS 4.x implemented "light-weight processes" or LWPs. NetBSD 2.x+, and DragonFly BSD implement LWPs as kernel threads (1:1 model). SunOS 5.2 through SunOS 5.8 as well as NetBSD 2 to NetBSD 4 implemented a two level model, multiplexing one or more user level threads on each kernel thread (M:N model). SunOS 5.9 and later, as well as NetBSD 5 eliminated user threads support, returning to a 1:1 model. [1] FreeBSD 5 implemented M:N model. FreeBSD 6 supported both 1:1 and M:N, user could choose which one should be used with a given program using /etc/libmap.conf. Starting with FreeBSD 7, the 1:1 became the default. FreeBSD 8 no longer supports the M:N model.

The use of kernel threads simplifies user code by moving some of the most complex aspects of threading into the kernel. The program doesn't need to schedule threads or explicitly yield the processor. User code can be written in a familiar procedural style, including calls to blocking APIs, without starving other threads. However, kernel threading on uniprocessor systems may force a context switch between threads at any time, and thus expose race hazards and concurrency bugs that would otherwise lie latent. On SMP systems, this is further exacerbated because kernel threads may literally execute concurrently on separate processors.

1:1 threads created by the user are in 1-1 correspondence with schedulable entities in the kernel. This is the simplest possible threading implementation. On Linux, the usual C library implements this approach (via the NPTL or older LinuxThreads). The same approach is used by Solaris, NetBSD and FreeBSD.

N:M maps some N number of application threads onto some M number of kernel entities, or "virtual processors". This is a compromise between kernel-level ("1:1") and user-level ("N:1") threading. In general, "N:M" threading systems are more complex to implement than either kernel or user threads, because both changes to kernel and user-space code are required. In the N:M implementation, the threading library is responsible for scheduling user threads on the available schedulable entities; this makes context switching of threads very fast, as it avoids system calls. However, this increases complexity and the likelihood of priority inversion, as well as suboptimal scheduling without extensive (and expensive) coordination between the userland scheduler and the kernel scheduler.

An N:1 model implies that all application-level threads map on to a single kernel-level scheduled entity; the kernel has no knowledge of the application threads. With this approach, context switching can be done very fast and, in addition, it can be implemented even on simple kernels which do not support threading. One of the major drawbacks however is that it cannot benefit from the hardware acceleration on multi-threaded processors or multi-processor computers: there is never more than one thread being scheduled at the same time. It is used by GNU Portable Threads.

There are many different and incompatible implementations of threading. These include both kernel-level and user-level implementations. They however often follow more or less closely the POSIX Threads interface.