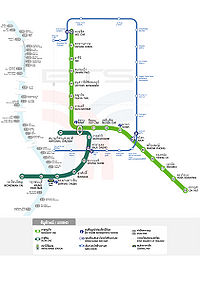 In cartography and geology, a topological map refers to a map that has been simplified so that only vital information remains and unnecessary detail has been removed. These maps lack scale, and distance and direction are subject to change and variation, but the relationship between points is maintained. A good example of a topological map is the route map of the Bangkok Mass Transit System (BTS Skytrain).

The name topological map is derived from topology, the branch of mathematics that studies the properties of objects that do not change as the object is deformed, much as the route map retains useful information despite bearing little resemblance to the actual layout of the transit system.

Not to be confused with a topographic map.