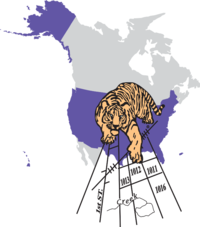 Topologically Integrated Geographic Encoding and Referencing, or TIGER, or TIGER/Line is a digital database developed by the United States Census Bureau to map land topography, define their locations and their proximity to roads, buildings, rivers, and lakes. Enumerated topographic features are integrated into the Census Bureau's database and used in sample surveys and censuses. TIGER provides a standardized method of measuring topography and its relation to infrastructure. Its purpose is fulfilled in creating an automated mapping resource with which census tracts can be measured without error.

TIGER was first employed during the 1990 census to support and automate the Bureau's process of taking the Decennial Census. Since then, TIGER has been used to survey land coverage of the United States and all of its territories, produce maps for a variety of programs and uses, and assign addresses to individual land tracts formed along natural and infrastructural borders. 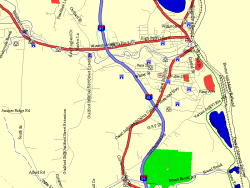 Prior to the 1960 census, the Census Bureau had enumerators visit each household in the United States to have them fill out a questionnaire. The Census Bureau provided enumerators with maps, showing the assigned area to canvass. In the late 1960s, the United States Census Bureau developed Dual Independent Map Encoding (DIME), a geographic information system to handle spatial data.[1] DIME was superseded in the 1980s, with development of TIGER, which addressed problems encountered during the 1980 census with maps and geographic classifications.[2] TIGER first used with the 1990 census.

All aspects of TIGER, including the data model, data structure, user interface, software applications, and map creation process, were developed in-house by Census Bureau staff, along with help from the USGS. Hydrography, railroads, and other features were scanned or digitized from USGS topographic maps (1:100,000 scale), and combined with updated addressing data from DIME and topology added.[3] The process was automated with use of batch processing, though staff manually digitized from 1:24,000 scale annotated USGS maps to make updates to the TIGER data.[4]

TIGER defines geographic areas and features using topology, to represent the relationships between such features on a map. TIGER enables geocoding of street addresses. However, because of temporal changes and typographical errors such as missing directionals and feature attributes, this can result in poor or incorrect matches in some areas. While the TIGER database itself models linear features and politcal and statistical geography, it is also linked topologically to the Census Bureau's Master Address File (MAF). The MAF and TIGER together (MAF/TIGER) are used to locate all data for purposes of collecting and tabulating the census. The Census Bureau receives a Delivery Sequence File (DSF) from the US Postal Service semi-annually and it is by use of this and select monthly field surveys that it locates new and problem addresses in MAF/TIGER. The Census Bureau also mails annual Boundary and Annexation Survey (BAS) maps to tribal, municipal, and county governments to allow them a chance to update or correct boundaries and/or linework that may be in error in TIGER. A few years before each decennial census, the Census Bureau administers a program known as the Local Update of Census Addresses (LUCA) in which it allows political jurisdictions to improve its MAF/TIGER by submitting address lists and local GIS data for inclusion in the Census.

TIGER includes both land attributes such as roads, buildings, rivers, and lakes, as well as areas such as counties, census tracts, and census blocks. Some of the geographic areas represented in TIGER are political areas, including state and federally recognized tribal lands, cities, counties, congressional districts, and school districts. Others are statistical areas, including Metropolitan Statistical Areas (MSA), census tracts, census block groups, and census blocks. ZIP Code Tabulation Areas (ZCTA) are quasi-statistical areas which attempt to approximate, but are by no means the same as, the USPS ZIP codes.[2] ZIP codes are not truly areas, but rather a range of deliverable addresses. Some or all of a ZIP's addresses may be reassigned to another ZIP. As many as 3% of ZIP codes undergo change each quarter. Thus, the 5-digit ZCTAs are of limited value over the long term.

TIGER data published through February 2007 (2006 Second Edition) were in a custom text-based format formally known as TIGER/LineTM files, while future editions will be available for download in shapefile and GML. The Census Bureau will also make the data available through WFS and WMS servers.[5] The data forms a base for OpenStreetMap in the USA.