In trigonometry and geometry, triangulation is the process of determining the location of a point by measuring angles to it from known points at either end of a fixed baseline, rather than measuring distances to the point directly. The point can then be fixed as the third point of a triangle with one known side and two known angles.

Triangulation can also refer to the accurate surveying of systems of very large triangles, called triangulation networks. This followed from the work of Willebrord Snell in 1615-17, who showed how a point could be located from the angles subtended from three known points, but measured at the new unknown point rather than the previously fixed points, a problem called resectioning. Surveying error is minimised if a mesh of triangles at the largest appropriate scale is established first, that points inside the triangles can all then be accurately located with reference to. Such triangulation methods dominated accurate large-scale land surveying until the rise of global navigation satellite systems in the 1980s.

Optical 3D measuring systems use this principle as well in order to determine the spatial dimensions and the geometry of an item. Basically, the configuration consists of two sensors observing the item. One of the sensors is typically a digital camera device, and the other one can also be a camera or a light projector. The projection centers of the sensors and the considered point on the object’s surface define a (spatial) triangle. Within this triangle, the distance between the sensors is the base b and must be known. By determining the angles between the projection rays of the sensors and the basis, the intersection point, and thus the 3D coordinate, is calculated from the triangular relations.

Distance to a point by measuring two fixed angles 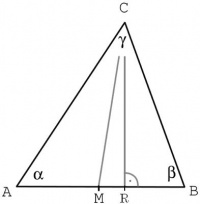 The coordinates and distance to a point can be found by calculating the length of one side of a triangle, given measurements of angles and sides of the triangle formed by that point and two other known reference points.

The following formulas apply in flat or Euclidean geometry. They become inaccurate if distances become appreciable compared to the curvature of the Earth, but can be replaced with more complicated results derived using spherical trigonometry.

Alternatively, the distance RC can be calculated by using the law of sines to calculate the lengths of the sides of the triangle:

The distance AB is known, so we can write the lengths of the other two sides as

Either way, this gives the result

This formula can be shown to be equivalent to the result from the previous calculation by using the trigonometric identity sin(α + β) = sin α cos β + cos α sin β.

Given AC or BC from the second calculation, the full coordinates of the unknown point can be calculated by using the sine and cosine of its bearing from the corresponding observation point to calculate its offsets on the north/south and east/west axes. 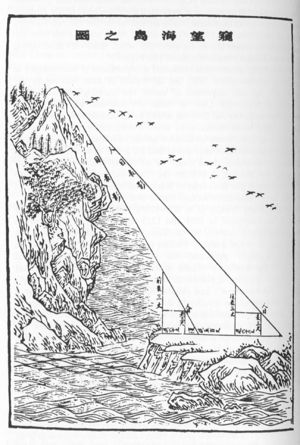 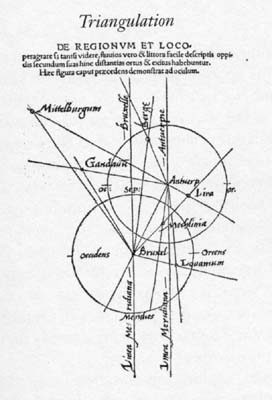 Gemma Frisius's 1533 proposal to use triangulation for map making 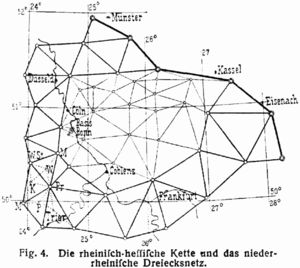 The use of triangles to estimate distances goes back to ancient times. In the 6th century BC the Greek philosopher Thales is recorded as using similar triangles to estimate the height of the pyramids by measuring the length of their shadows at the moment when his own shadow was equal to his height;[1] and to have estimated the distances to ships at sea as seen from a clifftop, by measuring the horizontal distance traversed by the line-of-sight for a known fall, and scaling up to the height of the whole cliff.[2] Such techniques would have been familiar to the ancient Egyptians. Problem 57 of the Rhind papyrus, a thousand years earlier, defines the seqt or seked as the ratio of the run to the rise of a slope, i.e. the reciprocal of gradients as measured today. The slopes and angles were measured using a sighting rod that the Greeks called a dioptra, the forerunner of the Arabic alidade. A detailed contemporary collection of constructions for the determination of lengths from a distance using this instrument is known, the Dioptra of Hero of Alexandria (c. 10-70 AD), which survived in Arabic translation; but the knowledge became lost in Europe. In China, Pei Xiu (224–271) identified "measuring right angles and acute angles" as the fifth of his six principles for accurate map-making, necessary to accurately establish distances;[3] while Liu Hui (c. 263) gives a version of the calculation above, for measuring perpendicular distances to inaccessible places.[4][5]

In the field, triangulation methods were apparently not used by the Roman specialist land surveyors, the agromensores; but were introduced into medieval Spain through Arabic treatises on the astrolabe, such as that by Ibn al-Saffar (d. 1035).[6] Abū Rayhĝn Bīrūnī (d. 1048) also introduced triangulation techniques to measure the size of the Earth and the distances between various places.[7] Simplified Roman techniques then seem to have co-existed with more sophisticated techniques used by professional surveyors. But it was rare for such methods to be translated into Latin (a manual on Geometry, the eleventh century Geomatria incerti auctoris is a rare exception), and such techniques appear to have percolated only slowly into the rest of Europe.[6] Increased awareness and use of such techniques in Spain may be attested by the medieval Jacob's staff, used specifically for measuring angles, which dates from about 1300; and the appearance of accurately surveyed coastlines in the Portolan charts, the earliest of which that survives is dated 1296.

Gemma Frisius and triangulation for mapmaking

On land, the Dutch cartographer Gemma Frisius proposed using triangulation to accurately position far-away places for mapmaking in his 1533 pamphlet Libellus de Locorum describendorum ratione (Booklet concerning a way of describing places) , which he bound in as an appendix in a new edition of Peter Apian's best-selling 1524 Cosmographica. This became very influential, and the technique spread across Germany, Austria and the Netherlands. The astronomer Tycho Brahe applied the method in Scandinavia, completing a detailed triangulation in 1579 of the island of Hven, where his observatory was based, with reference to key landmarks on both sides of the Øresund, producing an estate plan of the island in 1584.[8] In England Frisius's method was included in the growing number of books on surveying which appeared from the middle of the century onwards, including William Cunningham's Cosmographical Glasse (1559), Valentine Leigh's Treatise of Measuring All Kinds of Lands (1562), William Bourne's Rules of Navigation (1571), Thomas Digges's Geometrical Practise named Pantometria (1571), and John Norden's Surveyor's Dialogue (1607). It has been suggested that Christopher Saxton may have used rough-and-ready triangulation to place features in his county maps of the 1570s; but others suppose that, having obtained rough bearings to features from key vantage points, he may have the estimated the distances to them simply by guesswork.[9]

The modern systematic use of triangulation networks stems from the work of the Dutch mathematician Willebrord Snell, who in 1615 surveyed the distance from Alkmaar to Bergen-op-Zoom, approximately 70 miles (110 kilometres), using a chain of quadrangles containing 33 triangles in all. The two towns were separated by one degree on the meridian, so from his measurement he was able to calculate a value for the circumference of the earth - a feat celebrated in the title of his book Eratosthenes Batavus (The Dutch Eratosthenes), published in 1617. Snell calculated how the planar formulae could be corrected to allow for the curvature of the earth. He also showed how to resection, or calculate, the position of a point inside a triangle using the angles cast between the vertices at the unknown point. These could be measured much more accurately than bearings of the vertices, which depended on a compass. This established the key idea of surveying a large-scale primary network of control points first, and then locating secondary subsidiary points later, within that primary network.

Snell's methods were taken up by Jean Picard who in 1669-70 surveyed one degree of latitude along the Paris Meridian using a chain of thirteen triangles stretching north from Paris to the clocktower of Sourdon, near Amiens. Thanks to improvements in instruments and accuracy, Picard's is rated as the first reasonably accurate measurement of the radius of the earth. Over the next century this work was extended most notably by the Cassini family: between 1683 and 1718 Jean-Dominique Cassini and his son Jacques Cassini surveyed the whole of the Paris meridian from Dunkirk to Perpignan; and between 1733 and 1740 Jacques and his son César Cassini undertook the first triangulation of the whole country, including a re-surveying of the meridian, leading to the publication in 1745 of the first map of France constructed on rigorous principles.

Triangulation methods were by now well established for local mapmaking, but it was only towards the end of the 18th century that other countries began to establish detailed triangulation network surveys to map whole countries. The Principal Triangulation of Great Britain was begun by the Ordnance Survey in 1783, though not completed until 1853; and the Great Trigonometric Survey of India, which ultimately named and mapped Mount Everest and the other Himalayan peaks, was begun in 1801. For the Napoleonic French state, the French triangulation was extended by Jean Joseph Tranchot into the German Rhineland from 1801, subsequently completed after 1815 by the Prussian general Karl von Müffling. Meanwhile, the famous mathematician Carl Friedrich Gauss was entrusted from 1821 to 1825 with the triangulation of the kingdom of Hannover, for which he developed the method of least squares to find the best fit solution for problems of large systems of simultaneous equations given more real-world measurements than unknowns.

Today, large-scale triangulation networks for positioning have largely been superseded by the global navigation satellite systems. But many of the control points for the earlier surveys still survive as valued historical features in the landscape, such as the concrete triangulation pillars set up for retriangulation of Great Britain (1936-1962), or the triangulation points set up for the Struve Geodetic Arc (1816-1855), now scheduled as a UNESCO World Heritage Site.