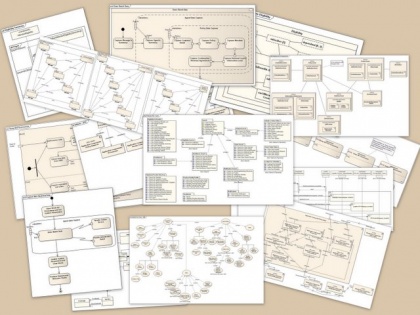 A collage of UML diagrams.

Unified Modeling Language (UML) is a standardized general-purpose modeling language in the field of software engineering. The standard is managed, and was created by, the Object Management Group.

The Unified Modeling Language (UML) is used to specify, visualize, modify, construct and document the artifacts of an object-oriented software intensive system under development.[1] UML offers a standard way to visualize a system's architectural blueprints, including elements such as:

UML combines best techniques from data modeling (entity relationship diagrams), business modeling (work flows), object modeling, and component modeling. It can be used with all processes, throughout the software development life cycle, and across different implementation technologies.[3] UML has synthesized the notations of the Booch method, the Object-modeling technique (OMT) and Object-oriented software engineering (OOSE) by fusing them into a single, common and widely usable modeling language. UML aims to be a standard modeling language which can model concurrent and distributed systems. UML is a de facto industry standard, and is evolving under the auspices of the Object Management Group (OMG). OMG initially called for information on object-oriented methodologies, that might create a rigorous software modeling language. Many industry leaders have responded in earnest to help create the UML standard.[1]

UML models may be automatically transformed to other representations (e.g. Java) by means of QVT-like transformation languages, supported by the OMG. UML is extensible, offering the following mechanisms for customization: profiles and stereotype. The semantics of extension by profiles have been improved with the UML 2.0 major revision. 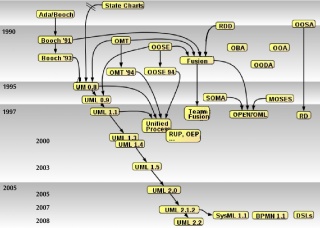 History of object-oriented methods and notation.

They were soon assisted in their efforts by Ivar Jacobson, the creator of the object-oriented software engineering (OOSE) method. Jacobson joined Rational in 1995, after his company, Objectory AB[4], was acquired by Rational. The three methodologists were collectively referred to as the Three Amigos, since they were well known to argue frequently with each other regarding methodological practices.

In 1996 Rational concluded that the abundance of modeling languages was slowing the adoption of object technology, so repositioning the work on a unified method, they tasked the Three Amigos with the development of a non-proprietary Unified Modeling Language. Representatives of competing object technology companies were consulted during OOPSLA '96; they chose boxes for representing classes over Grady Booch's Booch method's notation that used cloud symbols.

Under the technical leadership of the Three Amigos, an international consortium called the UML Partners was organized in 1996 to complete the Unified Modeling Language (UML) specification, and propose it as a response to the OMG RFP. The UML Partners' UML 1.0 specification draft was proposed to the OMG in January 1997. During the same month the UML Partners formed a Semantics Task Force, chaired by Cris Kobryn and administered by Ed Eykholt, to finalize the semantics of the specification and integrate it with other standardization efforts. The result of this work, UML 1.1, was submitted to the OMG in August 1997 and adopted by the OMG in November 1997.[5]

As a modeling notation, the influence of the OMT notation dominates (e. g., using rectangles for classes and objects). Though the Booch "cloud" notation was dropped, the Booch capability to specify lower-level design detail was embraced. The use case notation from Objectory and the component notation from Booch were integrated with the rest of the notation, but the semantic integration was relatively weak in UML 1.1, and was not really fixed until the UML 2.0 major revision.

Concepts from many other OO methods were also loosely integrated with UML with the intent that UML would support all OO methods. For example CRC Cards (circa 1989 from Kent Beck and Ward Cunningham), and OORam were retained. Many others also contributed, with their approaches flavoring the many models of the day, including: Tony Wasserman and Peter Pircher with the "Object-Oriented Structured Design (OOSD)" notation (not a method), Ray Buhr's "Systems Design with Ada", Archie Bowen's use case and timing analysis, Paul Ward's data analysis and David Harel's "Statecharts"; as the group tried to ensure broad coverage in the real-time systems domain. As a result, UML is useful in a variety of engineering problems, from single process, single user applications to concurrent, distributed systems, making UML rich but also large.

The Unified Modeling Language is an international standard:

UML has matured significantly since UML 1.1. Several minor revisions (UML 1.3, 1.4, and 1.5) fixed shortcomings and bugs with the first version of UML, followed by the UML 2.0 major revision that was adopted by the OMG in 2005[6].

There are four parts to the UML 2.x specification:

Although many UML tools support some of the new features of UML 2.x, the OMG provides no test suite to objectively test compliance with its specifications.

UML is not a development method by itself,[8] however, it was designed to be compatible with the leading object-oriented software development methods of its time (for example OMT, Booch method, Objectory). Since UML has evolved, some of these methods have been recast to take advantage of the new notations (for example OMT), and new methods have been created based on UML. The best known is IBM Rational Unified Process (RUP). There are many other UML-based methods like Abstraction Method, Dynamic Systems Development Method, and others, designed to provide more specific solutions, or achieve different objectives.

It is very important to distinguish between the UML model and the set of diagrams of a system. A diagram is a partial graphical representation of a system's model. The model also contains a "semantic backplane" — documentation such as written use cases that drive the model elements and diagrams.

UML models can be exchanged among UML tools by using the XMI interchange format.

UML 2.2 has 14 types of diagrams divided into two categories.[10] Seven diagram types represent structural information, and the other seven represent general types of behavior, including four that represent different aspects of interactions. These diagrams can be categorized hierarchically as shown in the following class diagram: class diagram

UML does not restrict UML element types to a certain diagram type. In general, every UML element may appear on almost all types of diagrams; this flexibility has been partially restricted in UML 2.0. UML profiles may define additional diagram types or extend existing diagrams with additional notations.

In keeping with the tradition of engineering drawings, a comment or note explaining usage, constraint, or intent is allowed in a UML diagram.

Structure diagrams emphasize what things must be in the system being modeled:

Since structure diagrams represent the structure of a system, they are used extensively in documenting the architecture of software systems.

Behavior diagrams emphasize what must happen in the system being modeled:

Since behavior diagrams illustrate the behavior of system, they are used extensively to describe the functionality of software systems.

Interaction diagrams, a subset of behavior diagrams, emphasize the flow of control and data among the things in the system being modeled:

The Protocol State Machine is a sub-variant of the State Machine. It may be used to model network communication protocols. 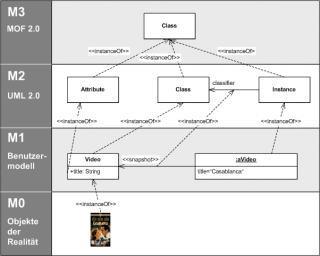 Illustration of the Meta-Object Facility.

Although UML is a widely recognized and used modeling standard, it is frequently criticized for the following deficiencies:

Language bloat
Bertrand Meyer, in a satirical essay framed as a student's request for a grade change, apparently criticized UML as of 1997 for being unnecessarily large; a disclaimer was added later pointing out that his company nevertheless supports UML.[11] Ivar Jacobson, a co-architect of UML, said that objections to UML 2.0's size were valid enough to consider the application of intelligent agents to the problem.[12] It contains many diagrams and constructs that are redundant or infrequently used.
Problems in learning and adopting
The problems cited above can make learning and adopting UML problematic, especially when required of engineers lacking the prerequisite skills.[13] In practice, people often draw diagrams with the symbols provided by their CASE tool, but without the meanings those symbols are intended to provide.
Cumulative Impedance/Impedance Mismatching
As with any notational system, UML is able to represent some systems more concisely or efficiently than others. Thus a developer gravitates toward solutions that reside at the intersection of the capabilities of UML and the implementation language. This problem is particularly pronounced if the implementation language does not adhere to orthodox object-oriented doctrine, as the intersection set between UML and implementation language may be that much smaller.
Dysfunctional interchange format
While the XMI (XML Metadata Interchange) standard is designed to facilitate the interchange of UML models, it has been largely ineffective in the practical interchange of UML 2.x models. This interoperability ineffectiveness is attributable to two reasons. Firstly, XMI 2.x is large and complex in its own right, since it purports to address a technical problem more ambitious than exchanging UML 2.x models. In particular, it attempts to provide a mechanism for facilitating the exchange of any arbitrary modeling language defined by the OMG's Meta-Object Facility (MOF). Secondly, the UML 2.x Diagram Interchange specification lacks sufficient detail to facilitate reliable interchange of UML 2.x notations between modeling tools. Since UML is a visual modeling language, this shortcoming is substantial for modelers who don't want to redraw their diagrams.[14]

Modeling experts have written sharp criticisms of UML, including Bertrand Meyer's "UML: The Positive Spin",[11] and Brian Henderson-Sellers in "Uses and Abuses of the Stereotype Mechanism in UML 1.x and 2.0".[15] 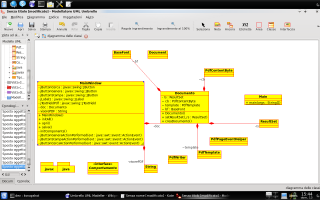