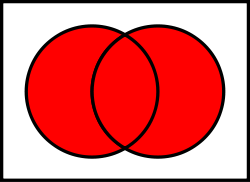 A Venn diagram representing the union of sets A and B. If one circle represents A, and the other B, then the red area represents the union of A and B. The area where the circles join, also shown in red, is the intersection of the two sets.

Other more complex operations can be done including the union, if the set is for example defined by a property rather than a finite or assumed infinite enumeration of elements. As an example, a set could be defined by a property or algebraic equation, which is referred to as a solution set when resolved. An example of a property used in a union would be the following:

If we are then to refer to a single element by the variable "x", then we can say that x is a member of the union if it is an element present in set A or in set B, or both.

Binary union is an associative operation; that is,

The operations can be performed in any order, and the parentheses may be omitted without ambiguity (i.e. either of the above can be expressed equivalently as A ∪ B ∪ C). Similarly, union is commutative, so the sets can be written in any order. The empty set is an identity element for the operation of union. That is, {} ∪ A = A, for any set A. Thus one can think of the empty set as the union of zero sets. In terms of the definitions, these facts follow from analogous facts about logical disjunction.

Union is an associative operation, it doesn't matter in what order unions are taken. In mathematics a finite union means any union carried out on a finite number of sets: it doesn't imply that the union set is a finite set.

That this union of M is a set no matter how large a set M itself might be, is the content of the axiom of union in axiomatic set theory.

The notation for the general concept can vary considerably, such as the following:

which refers to the union of the collection {Ai : i is in I}. Here I is an index set, and Ai is a set for every i in I. In the case that the index set I is the set of natural numbers, the notation is analogous to that of infinite series:

When formatting is difficult, this can also be written "A1 ∪ A2 ∪ A3 ∪ ···". (This last example, a union of countably many sets, is very common in analysis; for an example see the article on σ-algebras.) Finally, let us note that whenever the symbol "∪" is placed before other symbols instead of between them, it is of a larger size.

Intersection distributes over infinitary union, in the sense that