The Universal Transverse Mercator (UTM) coordinate system is a grid-based method of specifying locations on the surface of the Earth that is a practical application of a 2-dimensional Cartesian coordinate system. It is used to identify locations on the earth, but differs from the traditional method of latitude and longitude in several respects. The UTM system is not a single map projection. The system instead employs a series of sixty zones, each being a six-degree band of longitude, and is based on a specifically defined secant transverse Mercator projection. These zones are wedge shaped on a globe. 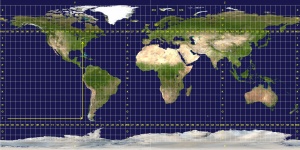 The Universal Transverse Mercator coordinate system was developed by the United States Army Corps of Engineers in the 1940s.[2] The system was based on an ellipsoidal model of the Earth. For areas within the conterminous United States, the Clarke 1866 ellipsoid was used. For the remaining areas of the Earth, including Hawaii, the International Ellipsoid was used. Currently, the WGS84 ellipsoid is used as the underlying model of the Earth in the UTM coordinate system.

Prior to the development of the Universal Transverse Mercator coordinate system, several European nations demonstrated the utility of grid-based conformal maps by mapping their territory during the interwar period. Calculating the distance between two points on these maps could be performed more easily in the field (using the Pythagorean theorem) than was otherwise possible using the trigonometric formulas required under the graticule-based system of latitude and longitude. In the post-war years, these concepts were extended into the Universal Transverse Mercator / Universal Polar Stereographic (UTM/UPS) coordinate system, which is a global (or universal) system of grid-based maps.

The Transverse Mercator projection is a variant of the Mercator projection, which was originally developed by the Flemish geographer and cartographer Gerardus Mercator, in 1569. It is one of the most commonly used projections for rectifying remotely sensed data as well as for large-scale topographic mapping. [1] This projection is conformal, so that it preserves angles and approximate shape but invariably distorts distance and area. UTM involves non-linear scaling in both Eastings and Northings to ensure the projected map of the ellipsoid is conformal. 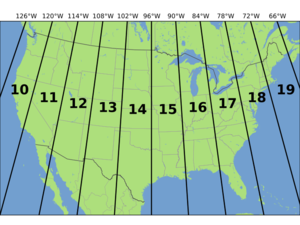 Simplified view of US UTM zones.

The UTM system divides the surface of the Earth between 80° S latitude and 84° N latitude into 60 zones, each 6° of longitude in width and centered over a meridian of longitude. Zones are numbered from 1 to 60. Zone 1 is bounded by longitude 180° to 174° W and is centered on the 177th West meridian. Zone numbering increases in an easterly direction.

Each of the 60 longitude zones in the UTM system is based on a transverse Mercator projection, which is capable of mapping a region of large north-south extent with a low amount of distortion. By using narrow zones of 6° (up to 800 km) in width, and reducing the scale factor along the central meridian by only 0.0004 (to 0.9996, a reduction of 1:2500) the amount of distortion is held below 1 part in 1,000 inside each zone. Distortion of scale increases to 1.0010 at the outer zone boundaries along the equator.

In each zone, the scale factor of the central meridian reduces the diameter of the transverse cylinder to produce a secant projection with two standard lines, or lines of true scale, located approximately 180 km on either side of, and approximately parallel to, the central meridian (ArcCos 0.9996 = 1.62° at the Equator). The scale factor is less than 1 inside these lines and greater than 1 outside of these lines, but the overall distortion of scale inside the entire zone is minimized.

Universal Polar Stereographic coordinate system maps the polar regions and is used in conjunction with the UTM system.

Distortion of scale increases in each UTM zone as the boundaries between the UTM zones are approached. However, it is often convenient or necessary to measure a series of locations on a single grid when some are located in two adjacent zones. Around the boundaries of large scale maps (1:100,000 or larger) coordinates for both adjoining UTM zones are usually printed within a minimum distance of 40 km on either side of a zone boundary. Ideally, the coordinates of each position should be measured on the grid for the zone in which they are located, but because the scale factor is still relatively small near zone boundaries, it is possible to overlap measurements into an adjoining zone for some distance when necessary.

UTM coordinates are easy to use and they work with almost all GPS devices. Also, UTM covers most of the world. The system uses meters as its base unit, which makes conversions and measurements easier. Unfortunately, it is difficult to use UTM if your area of interest covers more than one UTM zone. Therefore, using the UTM coordinate system is not the best choice for mapping extremely large areas. For example, it would not be useful when mapping all of the conterminous United States. [2]

Each zone is segmented into 20 latitude bands. Each latitude band is 8 degrees high, and is lettered starting from "C" at 80° S, increasing up the English alphabet until "X", omitting the letters "I" and "O" (because of their similarity to the numerals one and zero). The last latitude band, "X", is extended an extra 4 degrees, so it ends at 84° N latitude, thus covering the northernmost land on Earth. Latitude bands "A" and "B" do exist, as do bands "Y" and Z". They cover the western and eastern sides of the Antarctic and Arctic regions respectively. A convenient mnemonic to remember is that the letter "N" is the first letter in the northern hemisphere, so any letter coming before "N" in the alphabet is in the southern hemisphere, and any letter "N" or after is in the northern hemisphere. While latitude bands are not a part of UTM, they are a part of the Military Grid Reference System (MGRS)[3], which is only used sparingly.

The combination of a zone and a latitude band defines a grid zone. The zone is always written first, followed by the latitude band. For example (see image, top right), a position in Toronto, Canada, would find itself in zone 17 and latitude band "T", thus the full grid zone reference is "17T". The grid zones serve to delineate irregular UTM zone boundaries. They also are an integral part of the military grid reference system.

A note of caution: A method also is used that simply adds N or S following the zone number to indicate North or South hemisphere (the easting and northing coordinates along with the zone number supplying everything necessary to geolocate a position except which hemisphere). However, this method has caused some confusion since, for instance, "50S" can mean southern hemisphere but also grid zone "50S" in the northern hemisphere.[4]

Picture gallery: Grid zones in various parts of the world

A position on the Earth is referenced in the UTM system by the UTM zone, and the easting and northing coordinate pair. The easting is the projected distance of the position from the central meridian, while the northing is the projected distance of the point from the equator. The point of origin of each UTM zone is the intersection of the equator and the zone's central meridian. In order to avoid dealing with negative numbers a false origin is used. False origins are located south and west of the true origin, and thus create values known as false easting and northing. The central meridian of each zone is given a false easting value of 500,000 meters. Thus, anything west of the central meridian will have an easting less than 500,000 meters. For example, UTM eastings range from 167,000 meters to 833,000 meters at the equator (these ranges narrow towards the poles). In the northern hemisphere, positions are measured northward from the equator, which has an initial "northing" value of 0 meters and a maximum "northing" value of approximately 9,328,000 meters at the 84th parallel — the maximum northern extent of the UTM zones. In the southern hemisphere, northings decrease as you go southward from the equator, which is given a false northing of 10,000,000 meters so that no point within the zone has a negative northing value.

Because latitude band "S" is in the northern hemisphere, a designation such as "38S" is ambiguous. The "S" might refer to the latitude band (32N – 40N) or it might mean "South". It is therefore important to specify which convention is being used, e.g., by spelling out the hemisphere, "North" or "South".

To calculate UTM, formulas are needed, these formulas are truncated version of Transverse Mercator: flattening series, which were originally derived by Johann Heinrich Louis Krüger in 1912. They are accurate to around a millimeter within 3,000 km of the central meridian. [5]