From wiki.gis.com
Jump to: navigation, search
This article is about maps of the Earth. For other uses, see World map (disambiguation).

A world map is a map of the surface of the Earth, which may be made using any of a number of different map projections.

Maps of the world are often either 'political' or 'physical'. The most important purpose of the political map is to show territorial borders; the purpose of the physical map is to show features of geography such as mountains, soil type or land use. Geological maps show not only the physical surface, but characteristics of the underlying rock, fault lines, and subsurface structures. 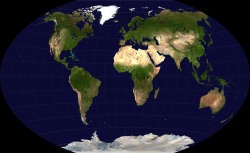 A Winkel Tripel projection, argued by Goldberg & Gott as the best overall whole-earth map projection known,[1] and the standard projection for world maps made by the National Geographic Society.
Main article: Map projection

Aeroplane pilots use aeronautical charts based on a Lambert conformal conic projection, in which a cone is laid over the section of the earth to be mapped. The cone intersects the sphere (the earth) at one or two parallels which are chosen as standard lines. This allows the pilots to plot a great circle (shortest distance) route approximation on a flat, two-dimensional chart.