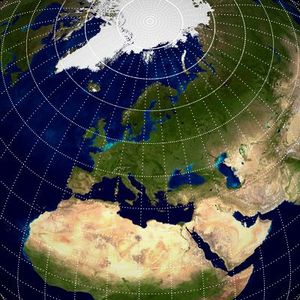 Xplanet is a renderer for planetary and solar system images, capable of producing various types of graphics depicting the solar system. It is normally used to create computer wallpapers, which may be updated with the latest cloud maps or the regions of Earth which are in sunlight.

Xplanet can be used to produce projected maps of any planet (but typically Earth), for example mollweide projections which show the whole earth at once, or mercator projections with a rectangular appearance suitable for filling the screen.

It is possible to overlay clouds or text (such as the location of recent events) onto these maps; a popular option is shading areas currently experiencing night.

Xplanet can also be used to render more general views of objects in the solar system, such as a view of the Earth from the moon. In more recent versions, Xplanet depicts eclipses, and some of its images show Jupiter's moons casting an eclipse onto the planet.

It can either generate wallpaper, save the resulting image, or produce textual output detailing the locations of various objects.

Configuration is done by modifying a text file. The Windows version comes with a simple editor called winXPlanetBG to assist in updating the configurations and helps to download the cloud maps automatically. OSXplanet is a simple GUI for the Mac OS X version.